A Tale of Two Genomes

Efforts to elucidate how mutations in a cell's DNA cause cancer have overwhelmingly focused on the DNA within the nucleus, but a new study published Nature Metabolism highlights the exciting potential of also looking at the genome of the cell's energy factories: the mitochondrial genome. 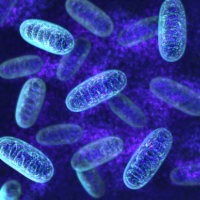 It's known that mitochondrial mutations can be found in cancer cells, but there has been little research into what they do or whether they have any effect on treatment response or how the cancer will progress.

To answer these questions, Dr Payam Gammage at the Beatson Institute collaborated with the Memorial Sloan Kettering Cancer Center in New York to collate and analyse the largest dataset so far of tumour samples that include mitochondrial genome data and the corresponding clinical outcomes of the patients.

By analysing this data from 344 patients with colorectal cancer, the researchers could match groups of mutations to the likelihood of survival. They found that, after controlling for other variables which affect cancer risk like age, the presence of mitochondrial mutations was associated with a 57 to 93% decreased risk of death from colorectal cancer, depending on the type of mitochondrial DNA mutation. The researchers hope that in the future, doctors could use this information to identify patients with more aggressive forms of bowel cancer so they can receive the most effective treatments.

Payam, who co-led the study, said: "This new study shines a light on the impact of mitochondrial DNA mutations in cancer, which have been overlooked for decades. This discovery could have a huge impact on patient care, with potential for changes to suggested treatments and a patient's outlook based upon the mitochondrial DNA status of their cancer. However, further research will be necessary to move these discoveries from the lab to the clinic."

Dr Ed Reznik, co-lead author based at Memorial Sloan Kettering Cancer Center, said: "Using data hiding in plain sight, we have shown that a critical piece of the cell's machinery to make energy is quite often broken in cancers. It now begs the question of how these mutations within mitochondrial DNA might be exploited as drug targets."

Michelle Mitchell, chief executive of Cancer Research UK, said: "This work highlights just how much more there is to discover about the inner workings of cancer, and all those breakthroughs for people with cancer we have yet to unlock. An incredible amount of basic laboratory research like this is being carried out across our Centres and Institutes, which is so important for helping to drive forward these unchartered and pioneering areas of research."