A GLASGOW cancer scientist who himself survived the disease as a child has been chosen as the face of a new campaign designed to save lives.

George Skalka, 28, a researcher at the city's Cancer Research UK Beatson Institute, was diagnosed with Hodgkin lymphoma aged just eleven years old. Now, days after graduating with his doctorate in cancer research, he is launching Cancer Research UK's campaign for World Cancer Day in Scotland and urging Glaswegians to join him by wearing the charity's Unity Band on February 4.

The Unity Band is available in three different colours – pink, navy and blue. It can be worn in memory of a loved one, to celebrate people who've overcome cancer or in support of those going through treatment.

Every hour, around 4 people are diagnosed with cancer in Scotland. By making a donation for a Unity Band, people across the city will be raising money for life-saving research which will help give people like George the chance of a bright future.

George said: "I owe my life to research. While cure rates for cancer are getting better, they will stagnate without continued funding. There's still lots of people who need help, and there are many things we still don't understand about cancer. Funding for research is vital so that we can ensure everyone survives cancer, not just a lucky few."

Scientist George, who lives in Bearsden with wife Holly who also works in cancer research, was diagnosed with Stage 4 Hodgkin lymphoma in September 2002 after his parents rushed him to hospital because he was having difficulty breathing. Doctors there found a large swelling on his neck and numerous tumours in his chest, indicating the cancer had spread to his lungs.

Just six days after starting secondary school, George had to undergo surgery to remove the affected lymph nodes, followed by a gruelling regime of chemotherapy – a combination of six powerful cancer-killing drugs and steroids that made him very sick. But George says it's thanks to research that the type of chemotherapy he had saved his life.

He said: "There was a study done the year before I was diagnosed which recommended a chemotherapy combination called ABVD ChlVPP in stage 4 Hodgkin lymphoma patients. The study had shown the new treatment combination was really effective at curing Hodgkin's so I was put on that regime.

"It was quite intense chemotherapy, a mixture of tablets and injections. I was on it for eight months and a lot of the treatments involved going in once, twice a week to have infusions over a 12-hour period. But it worked wonderfully, and I was in complete remission after the treatment."

As his immune system was suppressed by the chemotherapy, George was at risk of serious infection and was unable to go to school while undergoing his treatment. He spent much of his time instead with his grandparents Tony and Barbara, to whom he became very close. Tragically the family lost them both to cancer. It was a double hammer blow when Tony was diagnosed with prostate cancer while George was undergoing his treatment. He died eight months later in April 2004. Barbara died from breast cancer in November 2019.

George says it was having to say goodbye his beloved grandparents, as well as his own cancer experience, that inspired him to become a scientist to try and find new treatments for the disease.

He said: "When my grandad was ill, I said to my grandma I wanted to be a cancer researcher. I've always loved biology and it was pretty much from then I decided, and then just pursued it for the entirety of my education."

Driven to find new ways to beat the disease that has had such a huge impact on himself and his family, George studied Biological Sciences at the University of Warwick then a Masters in Cancer Sciences at the University of Birmingham. He started studying for a PhD at the University of Leicester before transferring to Glasgow's Cancer Research UK Beatson Institute in October 2019. His research has led him to uncover a protein that plays an important role in making cancer cells more sensitive to radiotherapy. More research is needed, but the discovery could mean that in the future doctors could test patients for this protein to determine if radiotherapy would be the most effective treatment for them, or whether they would be better to try another therapy.

From beating cancer himself, to finding new ways to help other people to beat the disease in the lab, the young scientist has been on a remarkable journey. And last Friday, 17 January, saw him mark another major milestone as he graduated with his PhD from the University of Leicester. 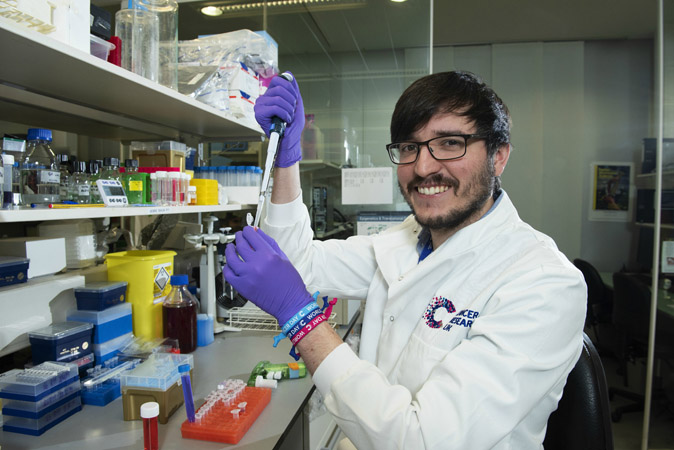 Now he is looking to continue his research in hard-to-treat cancers, such as pancreatic cancer and lung cancer, where he says he feels he can really make a difference. Reflecting on his own cancer experience, George says he also feels driven in his research to find kinder treatments. He has struggled with some of the side effects of the treatment he had as a child which have affected him later in life, such as chronic fatigue syndrome and hormonal imbalances, as well as the mental impact his experience has had on him.

He explained: "When I was diagnosed with cancer, I don't think I understood what was going on. My parents said when the doctor explained how tough the treatment would be, my response was 'Bring it on.' I think kids are quite robust, so the way they react to things is zero fear. It was only when I got older and I realised what had actually happened that I started to comprehend how it had turned out, and it hit me quite hard.

"I think, particularly for childhood cancers, there's a real problem with the mental outcome of being ill as you get older. I think doctors are now realising that, and there's more help now, but when I was ill there wasn't anything really. I think it's coming to face mortality, you do it at a much earlier age than the average person and you're too young to do it really. The side effects are difficult to deal with – for me it's hard being extremely tired all the time and it can get me quite down. As someone who's been through cancer treatment as a child, I want to let people know it's OK to feel like that. You're allowed to feel rubbish. You can still have a full and happy life, it doesn't have to limit you – it's just something you need to talk about. People understand. I think it's important to talk, that's what helped me in the end."

He continued: "My own experience drives me to find treatments with less toxicity. I know what it's like to be treated with drugs that have a massive impact on your body, and how hard it is to deal with the after-effects.

"That's why I'm asking people in Glasgow to show their support on World Cancer Day and help Cancer Research UK to tackle this devastating disease with better, kinder treatments. Just by wearing a Unity Band we can all make a real difference to people with cancer."

World Cancer Day is an international movement, uniting people around the world on 4 February to beat cancer.

In the UK, one in two people will be diagnosed with the disease at some point in their lifetime.

The good news is, thanks to research, more people are surviving than ever before. Survival has doubled in the last 40 years in the UK and Cancer Research UK's work has been at the heart of that progress.

But there is still so much more work to do. That's why this World Cancer Day, the charity is calling on everyone to raise money to help accelerate progress and save more lives.

Dr Victoria Steven, Cancer Research UK's spokesperson in Scotland, said: "We are very grateful to George for his support and showing how important it is for everyone to wear a Unity Band on World Cancer Day.

"Our research has played a role in developing 8 of the world's top 10 cancer drugs and we're working every day to find new ways to prevent, diagnose and treat the disease. But we can't do it alone.

"By making a donation of just £2 for a Unity Band, Glaswegians will be funding world-class research to help more people, like George, survive. Together, we will beat cancer."