In April, we shared the story of a paper from Dr Payam Gammage, shedding light on the role of mitochondrial DNA mutations in cancer. Here, Payam explains in his own words the importance of mitochondria in cancer and the impact this could one day have on cancer care.

Mitochondria are in vogue, with devotees ranging from exercise physiologists and sports scientists to molecular biologists and clinicians all coalescing around these unusual organelles.

Given their position as a metabolic and energetic hub, as well as their central role in controlling cell death, mitochondria are also an area of focus for many cancer scientists. However, one essential facet of mitochondrial biology in cancer has remained underexplored; mitochondrial DNA (mtDNA).

A physically and heritably distinct piece of DNA that is passed down the generations through the maternal line, mtDNA exists only inside mitochondria. Recent work from my lab at the Cancer Research UK Beatson Institute, in collaboration with scientists at the Memorial Sloan Kettering Cancer Center in the US led by Dr Ed Reznik, has revealed the substantial impact mutations in mtDNA can have in cancer. Understanding this could offer up new indicators of disease prognosis and provide a new focus for future therapeutics.

At the molecular level, the components of mammalian mitochondria are assembled from viruses, bacteria and eukaryotes. As such, the organelle we see in human cells today is a trans-kingdom mixture that doesn’t fully resemble any of its ancestors.

Human mtDNA is a small genome, only 16,569 base pairs long. In keeping with its bacterial ancestry, mtDNA is also circular and multicopy – with hundreds to thousands of copies present in every cell. mtDNA is very genetically compact and encodes only 13 proteins, all of which are core subunits of the oxidative phosphorylation (OXPHOS) complexes.

These OXPHOS complexes, found only within mitochondria, are unique in human biology as they are the only cellular structures formed of proteins encoded by genes from the two separate genomes. The nuclear DNA provides around 90% of the required proteins for OXPHOS, and the mtDNA provides the remaining 10%.

A new view of cancer?

Now, OXPHOS is not the only way to generate energy and building blocks for cells. A huge cancer research effort has gone into detailing the ways in which cancer cells can be rewired to survive and undergo rapid cell growth.

One of these metabolic changes is a much-discussed phenomenon known as the Warburg effect, where tumours generate large amounts of lactate by preferentially utilising glucose as a fuel source, despite being in conditions where their mitochondria could pick up the slack. Otto Warburg, and many since, have suggested that the altered metabolism associated with this effect, and other forms of metabolic dysfunction, are a driver of cancer initiation and progression. However, consensus on this view has never been reached in the cancer research community and these metabolic changes are often seen as a consequence of cancer rather than a potential cause.

In light of recent developments, this view may need to evolve. While anecdotal evidence of mtDNA mutations arising in tumours has been around for nearly two decades, in the last five years or so several studies using large scale sequencing data concluded that roughly 60% of tumours bear mutations of mtDNA (1,2,3). While these studies lacked statistical power and clinical insight, such clear links between a highly abundant and plausible source of mitochondrial dysfunction and cancer had never been made previously. There was a growing temptation amongst some to view these tumours as isolated groups of cells with both cancer and severe mitochondrial disease.

In a paper recently published in Nature Metabolism, my lab and colleagues from Memorial Sloan Kettering Cancer Center, detail the patterns underlying mtDNA mutations, the impacts these mutations have on tumours and the clinical implications of this in colorectal cancer (CRC) patients (4). In agreement with previous studies, we found that around 60% of tumours contain one or more mtDNA mutations. We also found highly recurrent mutations occurring across all tumours at specific stretches of DNA where a single DNA base is repeated, known as a homopolymer. This is significant because recurrence is an indicator of selective pressure – it implies the mutation confers an advantage to the cancer.

We also calculated a comparative mutation rate for all known cancer-associated genes, which included mtDNA genes. Surprisingly, this led us to the conclusion that mtDNA genes are among the most mutated genes in all cancer, with 25 of the top 30 most mutated genes being encoded in mtDNA. While comparing mtDNA and nuclear DNA does have its limitations – a relative understanding of these mutations can give us a sense of context and proportion when considering cancer genetics. Additionally, we showed that the mutational burden in mtDNA is unrelated to the mutational burden in the nucleus. This is important, because nuclear DNA mutational burden in many tumours is associated with their response to, among other things, immune-targeted therapies. It’s easy to see how mitochondrial mutational status could be harnessed to better allocate such treatments, if not allow development of mitochondria-targeted immunotherapies which may have advantages over current immunotherapy targets. Intriguingly, we saw that the burden of mutations in mtDNA was spread unevenly across the OXPHOS complexes. This hints at how tumours might harness specific forms of mitochondrial dysfunction, while struggling to survive with others and could inform future therapeutic approaches.

The mutations we detected in mtDNA are not arising late in tumour development but are present in stage 1 tumours at a comparable rate to stage 3 tumours. They also cause a distinct change in the way the nuclear DNA of the tumour cell is expressed. Increases in nuclear encoded OXPHOS genes and decreases in genes associated with innate immunity have been linked with diverse mtDNA mutations across nearly all cancers studied. Importantly, we found a substantial survival benefit for CRC patients whose tumours bear mtDNA mutations, with a decreased risk of death of 57-93% for the majority of those in this category. 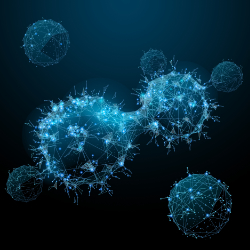 This potentially holds significant immediate implications for CRC patient care, however, it also raises many other questions: will this impact be seen in other cancers or just CRC? What are the precise differences between mtDNA mutant vs non-mutant cancer, beyond the mtDNA changes? Do some approaches to therapy for these patients work better or worse because of this? Beyond these specific, immediate questions, do mtDNA mutations actually cause or predispose cells to becoming cancerous, and how has this been missed for so long?

A lot of clinical and laboratory work needs to be done to address these. However, some issues are easier to address. For example, in what now seems to be a major misstep, mtDNA has been actively excluded from analysis of sequenced tumours as a matter of course, mostly owing to technical issues that arise when mtDNA is included in the data. This is an unfortunate but likely reason for their relevance to cancer being overlooked.

This article is reproduced from a Research Feature on Cancer Resesarch UK's Science Blog under a Creative Commons Attribution-NonCommercial-ShareAlike License.