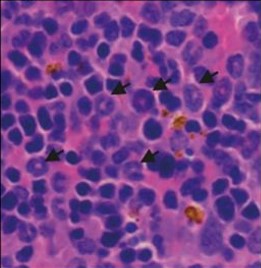 Neutrophils – which are associated with poor outcomes in cancer – come in many different types. Reliable cell surface markers are needed to distinguish and study these different populations of neutrophils. In a study released in bioRxiv (Maturation, developmental site, and pathology dictate murine neutrophil function), Postdoc John Mackey identified a protein called Ly6G as one such marker. Importantly, having an abundance of cells expressing medium levels of Ly6G was associated with higher rates of metastasis. The team also identified that the site where neutrophils develop – either the bone marrow or the spleen – affects the genes they express and their functional capacity.

A type of T cell called γδ T cells are present in the lung and play important roles in both healthy lungs and in cancer, but how they are regulated is an open question. In another study in bioRxiv (Single-cell analysis uncovers differential regulation of lung γδ T cell subsets by the co-inhibitory molecules, PD-1 and TIM-3), postdoc Sarah Edwards and co-authors carried out extensive analysis at a single-cell level to show that different subsets of these cells have distinct sets of cell surface markers, giving important information as to how they are regulated and the role they play in cancer progression.