Patients affected by recessive dystrophic epidermolysis bullosa often develop life-threatening, aggressive skin cancer (SCCRDEB) with limited treatment options. Jasbani Dayal, Gareth Inman and colleagues found that although the response to blocking endogenous TGFβ signalling was diverse in SCCDREB samples, the treatment predominantly stopped cancer cell proliferation (in British Journal of Dermatology). This offers potential therapeutic benefits to these patients but clinical trials will need to proceed with caution due to the tumour-proliferative effects seen in a small number of patients.

Shashi Singh, Rob Insall and co-authors showed that the Scar/WAVE complex - a key driver for the formation of finger-like protrusions at the front edge of a cell – is phosphorylated after its activation, thus is not required for its activity. However, upon sensing physical adhesion, cells with phosphorylated Scar/WAVE complex demonstrated altered dynamics and size of projections, changing the cell's migration speed ("Cell–substrate adhesion drives Scar/WAVE activation and phosphorylation by a Ste20-family kinase, which controls pseudopod lifetime"). Investigating how cells move is important for understanding how cells travel in a physiological context such as cancer spread.

Alba Roca, Stephen Tait and other Beatson scientists found that "Venetoclax causes metabolic reprogramming independent of BCL-2 inhibition". The BH3-mimetic drug Venetoclax diminished mitochondrial function and inhibited the TCA cycle, a key biochemical reaction to release stored energy, through a mechanism not involving BCL-2. Although the authors observed mitochondria with an unusual shape and upregulation of the cell's integrated stress response in the drug-treated cells, the metabolic effects of Venetoclax on cells needs to be investigated further.

Together with other Beatson scientists, Syed Feroj Ahmed and Lori Buetow showed that the E3 ubiquitin ligase DTX2 recruits proteins commonly involved in DNA damage repair via the domain on its C-terminal (DTC). While PAR-modified proteins interact with DTX2 at an ADP-ribose-binding pocket at DTC, the RING domain facilitates substrate ubiquitination. This study establishes another mechanism of cross-talk between protein modifications, as seen for other signalling pathways.

Update on our volunteers

Beatson scientists continue to support and volunteer at the University of Glasgow's Lighthouse Lab COVID-19 testing centre. Over 20 scientists from 12 of the Institute's different research groups and advanced technologies teams have volunteered their expertise, day and night, and the Lighthouse Lab team has recently passed the milestone of over 1,000,000 samples processed.

Although many of these scientists are now returning to cancer research, the CRUK Beatson Institute remains incredibly proud of those who volunteered to establish, manage and work in the Lighthouse Lab and those who continue to do so. 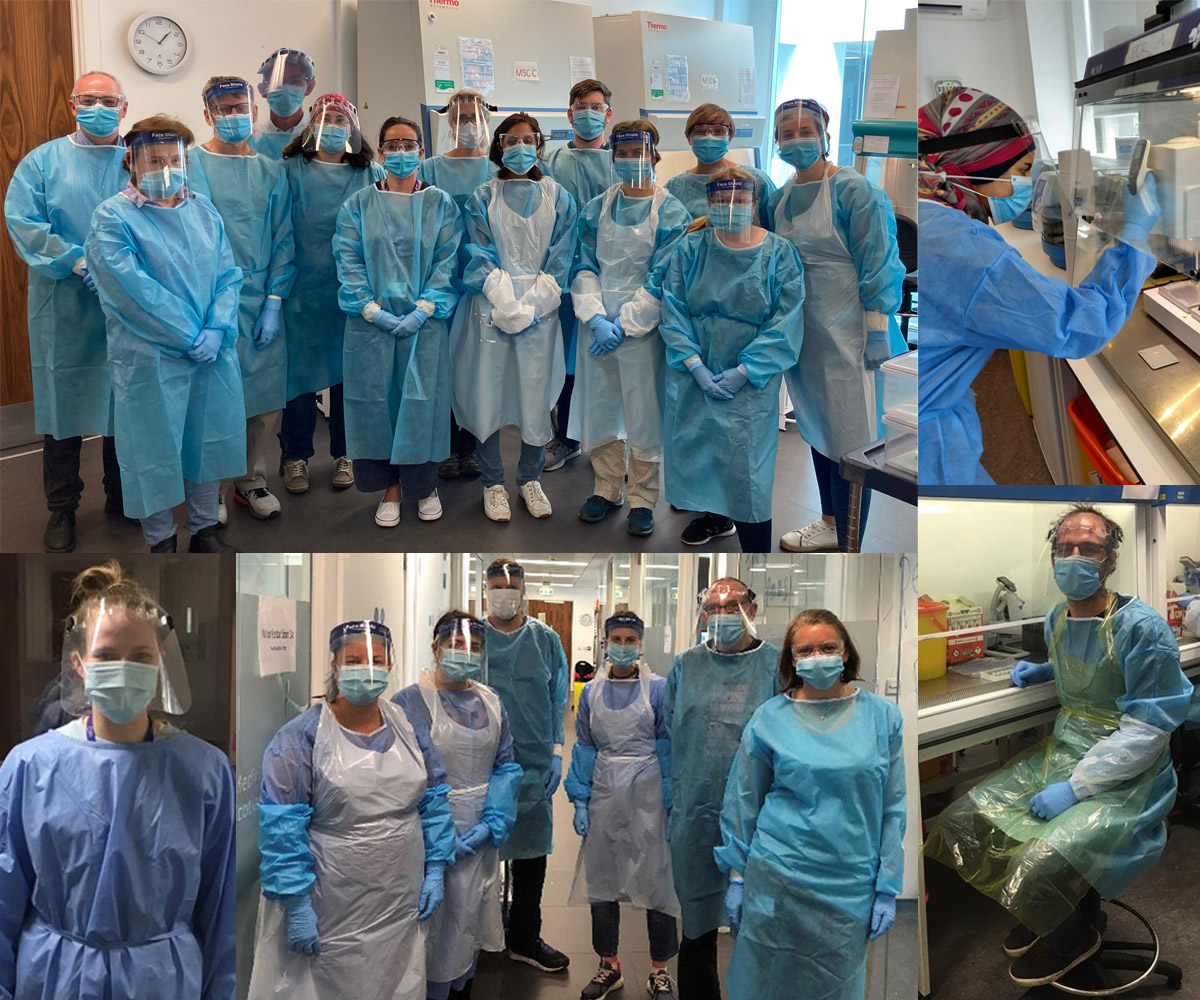 Jamie Whitelaw, Karthic Swaminathan, Laura Machesky and co-authors show in their study in Cells that the WAVE regulatory complex (WRC) is required for cell mobility, as seen for example in cancer spread. When one of WRC's components, Nckap1, was deleted, cells were unable to form sheet-like projections at their front edge and the turnover of their anchoring system was reduced, resulting in the slowing down of the cells' forward speed. This demonstrates a clear role of WRC in the ability of cells to migrate.

Florian Bock, Stephen Tait and colleagues at the Beatson Institute made a pre-print available on bioRxiv – "Apoptosis-induce FGF signalling promotes non-cell autonomous resistance to cell death" - which describes how dying cells alert their neighbours by releasing the signalling protein FGF2. In response, the surrounding cells upregulate their survival machinery, protecting themselves from cell death. Understanding this process is important to help us to make anti-cancer therapies more efficient and avoid the development of treatment resistance.

Together with fellow scientists from the Beatson Institute, Sandeep Dhayade, Matthias Pietzke and Alexei Vazquez investigated the impact of formate supplementation in their publication in Nutrients. It found that nutritional intervention with formate has sex-specific effects on body weight and the gut microbiota in mice. Further work will be required to determine the role of formate supplementation in humans.

Another publication by Matthias Pietzke and Alexei Vazquez – "Metabolite AutoPlotter - an application to process and visualise metabolite data in the web browser" - introduces a user-friendly online tool that reads and processes high-throughput metabolite data to generate high-quality, individual plots. The online application is under constant development and the developers will responds to users' feedback and suggestions.

Ed Roberts was co-first author on a paper with colleagues from UCSF in Cancer Cell (Visualizing synaptic transfer of tumor antigens among dendritic cells), which describes how dendritic cells (DCs) transport tumour antigens to the lymph node within vesicles, which they then transfer to other resident DCs. Only DCs containing these vesicles can then activate T cells, which go on to infiltrate the tumour. Understanding these early steps in the development of anti-tumour immunity could ultimately lead to better treatments for cancer.

Emily Kay, Sara Zanivan and co-authors made a preprint available on bioRxiv (Metabolic control of tumour extracellular matrix production in cancer-associated fibroblasts), which finds that extracellular matrix production by cancer-associated fibroblasts - which is pro-tumorigenic - is under strict metabolic control, in particular as a result of increased proline synthesis.

Daniel Murphy and colleagues also had a preprint in bioRxiv (Asbestos accelerates disease onset in a genetic model of malignant pleural mesothelioma), which shows that asbestos-driven inflammation contributes to mesothelioma in a genetically modified mouse model. This model system could assist in finding better ways to tackle this challenging lung cancer, which has its highest incidence in Glasgow.

Matthias Pietzke, Alexei Vazquez and colleagues at the Beatson and in Cambridge investigated amino acid dependent formaldehyde metabolism in mammalian cells in a paper in Communications Chemistry.

Round up of the latest volunteer stories

The Beatson is extremely proud of all of our scientists who are volunteering in the Lighthouse Lab testing centre in Glasgow and supporting efforts to tackle COVID-19. Here is a round up of some of their stories, which you can currently find in the Scottish press:

Jo Birch featured in the Stirling Observer, and also on the Daily Record website: https://www.dailyrecord.co.uk/news/balfron-scientist-jo-steps-up-22181868

Lynn McGarry was on the front page of that Paisley Daily Express, and also on the Daily Record website: https://www.dailyrecord.co.uk/news/local-news/paisley-cancer-research-scientist-joins-22193081

Dave Bryant inspiring people to Race for Life at Home

Dr Dave Bryant, one of our scientists here at the Beatson, is doing all he can to support Cancer Research UK's Race For Life At Home. He is encouraging everyone to take part in a challenge at home to raise vital funds for life-saving cancer research. But he and his husband, Zachary Claudino have also set themselves a Race For Life At Home challenge of their own, to run for 30 minutes every day together during their daily exercise with their pet dog, Lucy. 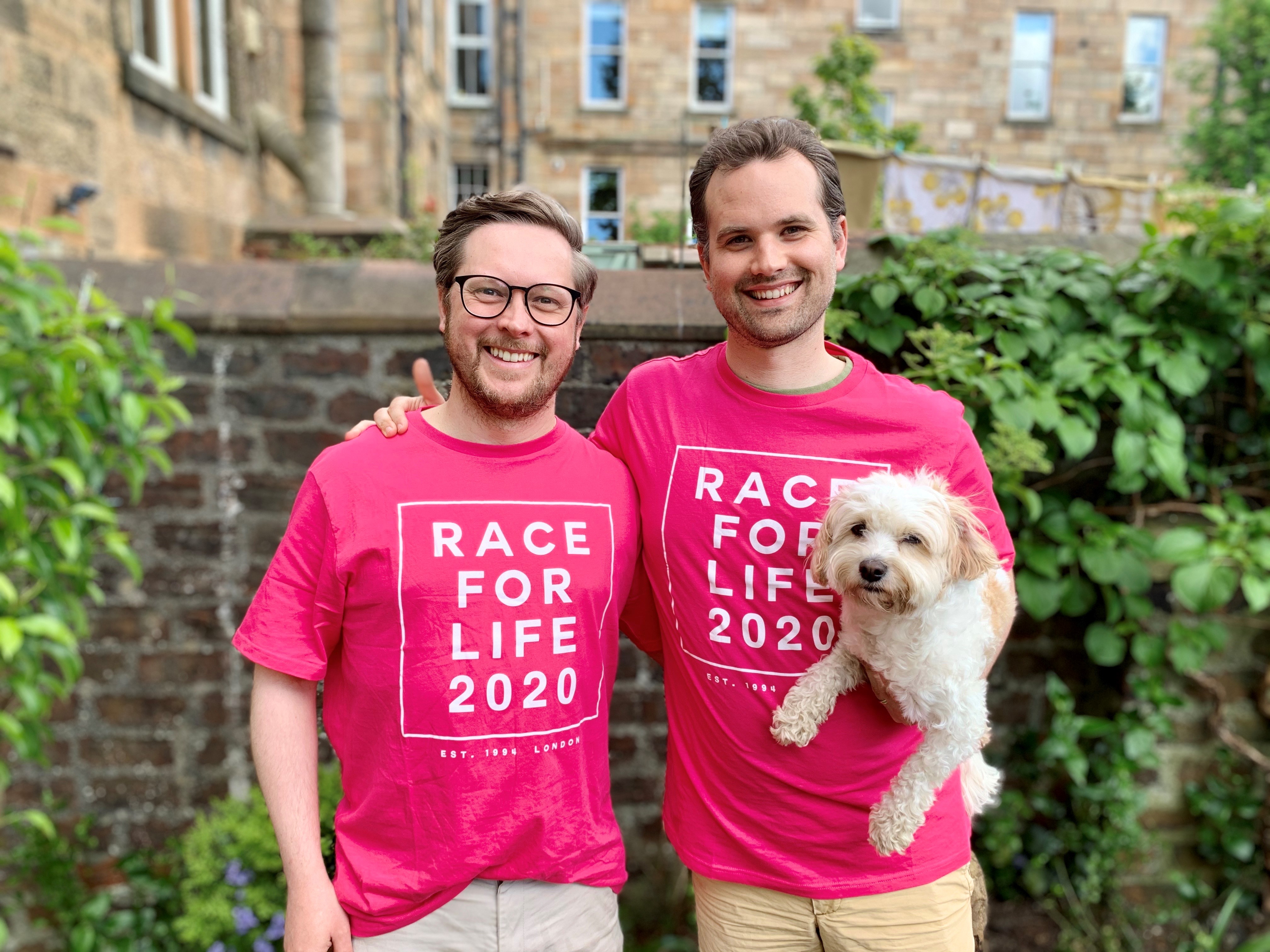 Dave, Zach and Lucy the dog

As part of his research at the Institiute, Dave and his team of scientists are building prostate, ovarian and bowel cancer 'avatars': 3D models of cancer cells that they can study using time-lapse microscopy to find out how they move and spread. Dave explains: "We use AI techniques to analyse the patterns of cancer cell spread. Then we can genetically alter the cancer cells to identify which genes cause them to spread. Our hope is that this information could help us find and test drugs that could stop cancer from spreading."

More details of how to take part in Race For Life At Home can be found here.